As I start writing this entry I’m sitting on a terrace in Positano overlooking the sea, and trying to capture the feeling of the area.  As I finish writing, I’m on the plane home and reminiscing back.  Positano is most certainly at its heart Italian, but influences from many other countries and cultures are felt everywhere.  Especially in the food.  Was it conquered during the centuries?  Yes many times.  There was never a real military here so “conquering” was not a herculean feat.  It has been occupied, and/or strongly influenced, by the Greeks, Bourbons, Spanish, the southern Mediterranean, Northern Africa, and of course the Roman Empire. 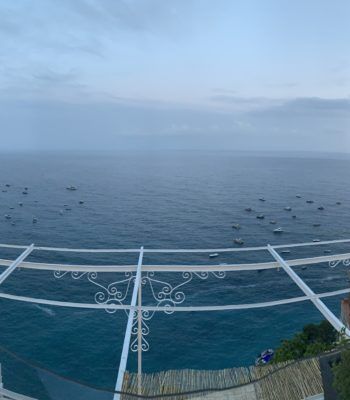 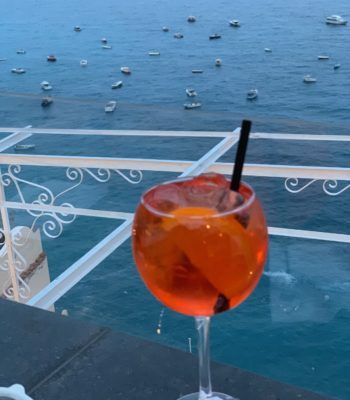 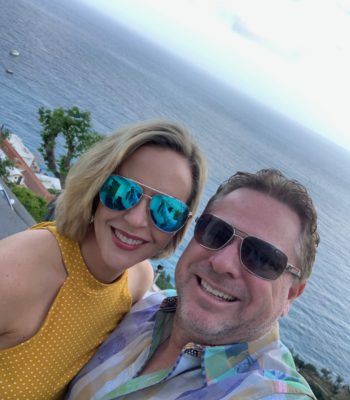 Positano is built on the side of a mountain.  It overlooks the Tyrrehenian Sea at the east end of the Mediterranean.  Pretty much everywhere you go in Positano you will have a view of the sea and it is brilliant in every shade of blue imaginable.  It is not hard to see why seafood dishes dominate the cuisine here. 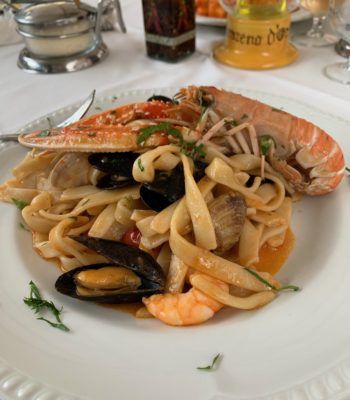 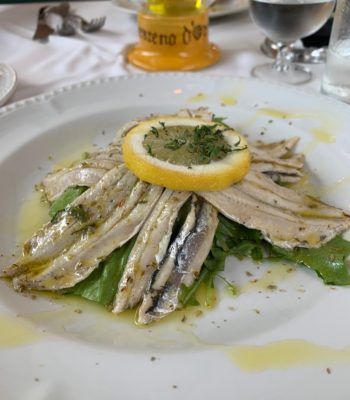 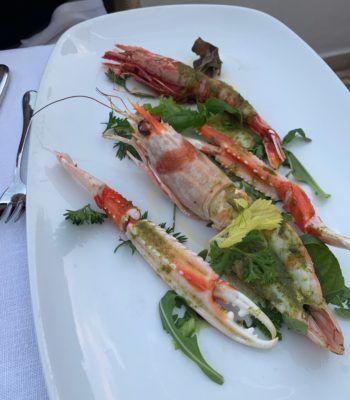 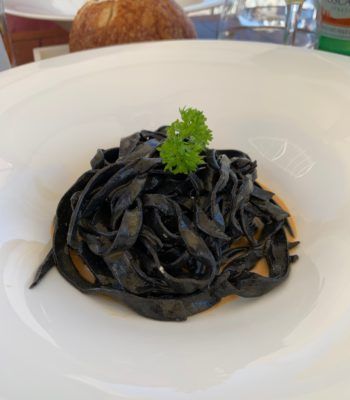 Boats leisurely enter and exit the bay throughout the day.  As you watch them you can imagine ships of other centuries following the same paths and landing on the same docks.  Much of the cuisine on the Amalfi coast is owed to the very active maritime trade through the centuries.  Many of the now prolific vegetables and fruits were not originally indigenous to the area.  They were brought here from countless other areas of the world, including the Americas once trade started there.

Immediately outside of the main bay is Li Galli, a private island that was purportedly purchased by the owner for a mere $64 million euros (about $80 million U.S).  The $64,000 question is whether its true or not.  It would actually be a $76,000 euros question as that is what it costs to rent Li Galli for a week.  But hey, the ancient Greeks believed its where the Sirens lived so isn’t that a small price to pay for a Siren sighting? 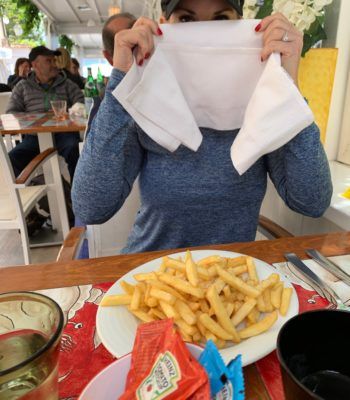 An American Siren having fries in Italy

There are cafes everywhere.  Some are so-so and some are Michelin rated.  Did we ever have a bad meal there?  No way.  But some were better than others.  The one constant was that everything was fresh, especially the seafood.  That would be a theme as we traveled throughout Italy – if it was not readily available or in season then generally it was not on the menu.  It was not too hard to find cafes that had authentic local cuisine for the area.  Google the area you are in and you’ll find cafes/restaurants that have been around for decades, some well over 100 years.  Those are the ones you’re looking for.  Also, many Italian cafes have the year that they opened on the outside of the establishment – another good indicator. 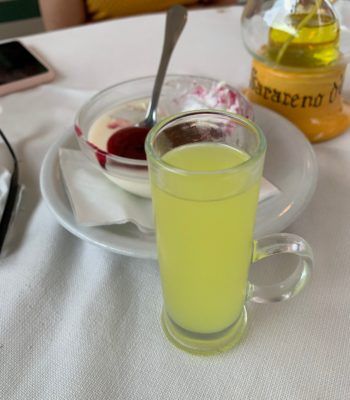 The ever present Limoncello 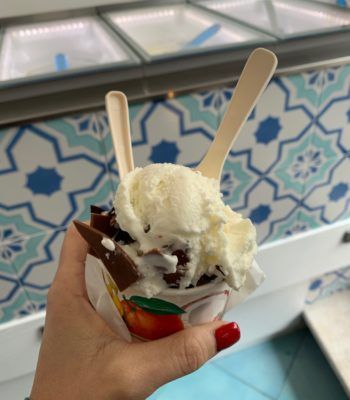 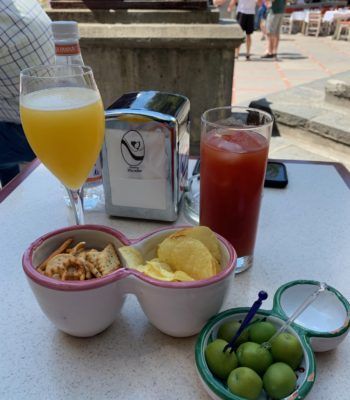 You will have to try Limoncello when you visit the Amalfi Coast.  It is primarily made in nearby Sorrento and it is found everywhere, as are lemons.  Lemon trees abound both in the countryside and in people’s backyards.  They are not as smooth on the surface as those back home but you will many times find them much bigger here.  It was not uncommon to see one as large as a cantaloupe. 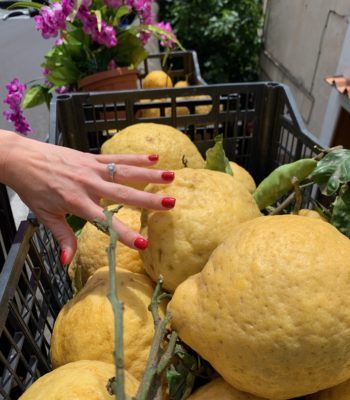 The ever present Limoncello

History is everywhere here.  Another thing that is everywhere in Positano is steps.  Thousands of them.  Many have been here longer than anyone knows, painstakingly restored through the centuries with rock and mortar by those that are long gone.  John Steinbeck in 1953 wrote “Positano’s houses climb a hill so steep it would be a cliff except that stairs are cut in it.”  They are most certainly handy for descending as you can avoid winding your way down many roads via the steps.  However, coming back up is a whole different endeavor.  Short distances are okay.  But if you choose to walk from Il Fornillo beach about 3/4 of the way up the cliffs your journey will be fraught with heavy breathing, fatigue, delusions (“Is that the top?!” “Is that gelato?!” “Do I hear a Siren singing?!”), and a general realization that your heart actually can beat out of your chest.  I swear I saw human bones at one point in our ascent.  ”I get it brother”, I said as I passed.  Moral of the story – the shortest distance between two points may be a straight line on the map, but if elevation is involved beware the stair. 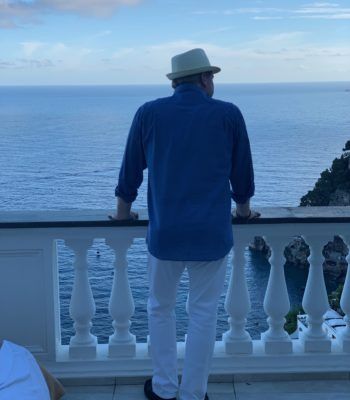 Kevin the Traveler, view from terrace of Villa Gabrisa 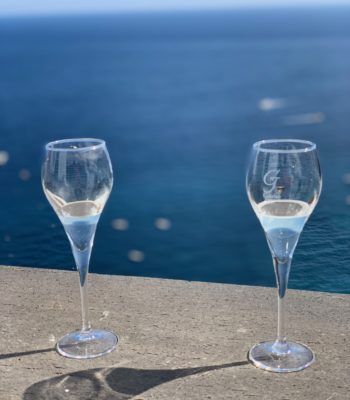 Prosecco on the terrace 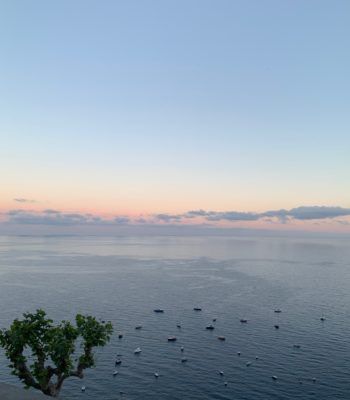 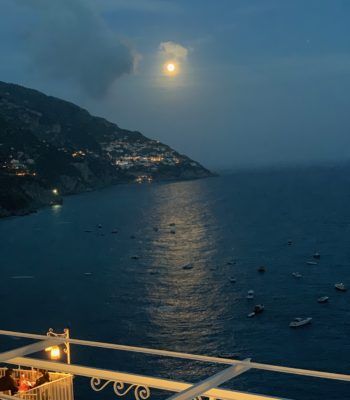 We had the great fortune to stay at a lovely boutique hotel (Villa Gabrisa) about 3/4 of the way up the hill.  The views of the houses, hotels, and other buildings below, as well as the sea, were magnificent.  Clouds would turn purple then pink as the sun would slowly descend.  They would reflect their colors onto the waters below in a brilliant spectral display.  Sounds of laughter, music and people enjoying their dinners would start to echo up the hill from the cafes below.  Smells of food would waft upwards.  Bread baking, pasta cooking, all manner of proteins grilling.  You would get bits of each as you sat looking out over the water.  Later, faint smells of after-dinner cigars would float through as the moon would come up over the sea.  You begin to wonder how many ancient Greeks, Romans, Bourbons, and others sat near here and watched the same moon rise over the same sea.  I agree with Steinbeck when he wrote “Positano bites deep. It is a dream place that isn’t quite real when you are there and becomes beckoningly real after you have gone.” 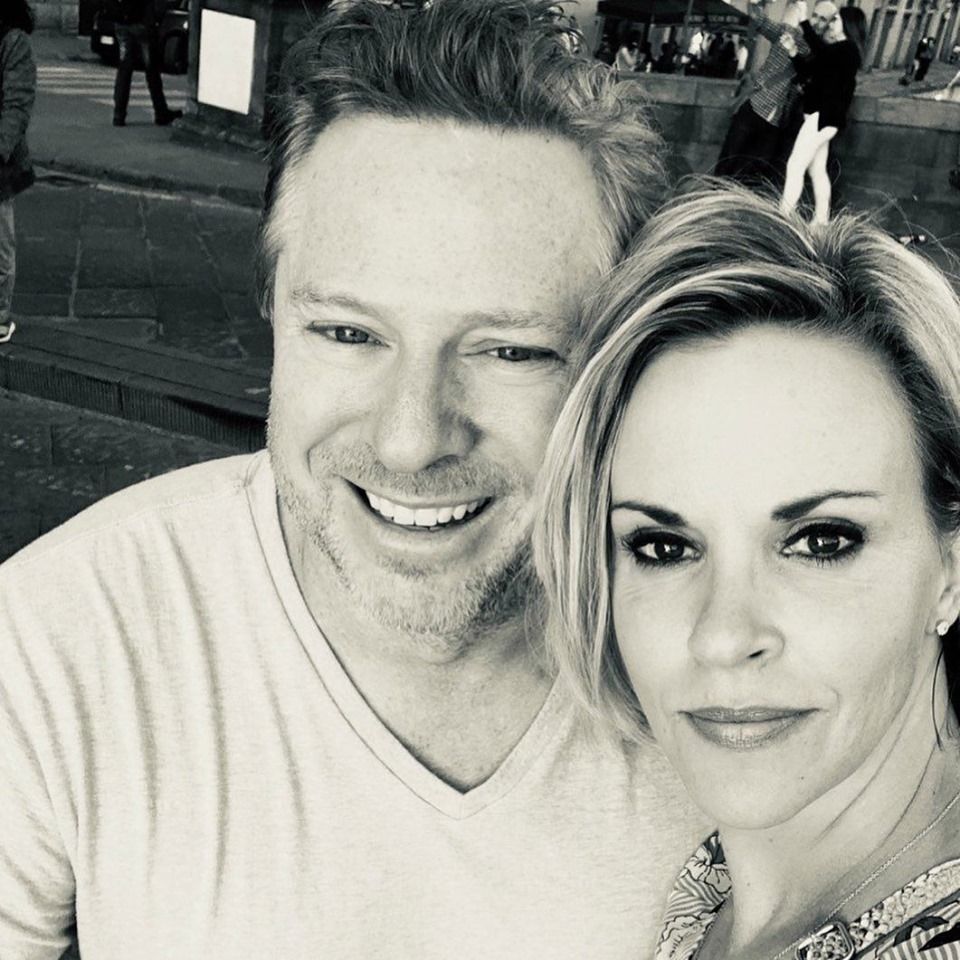